Ashbourne is steeped in history, and still today hosts the world famous Shrovetide Football. Quoted as 'The Gateway to the Peak District', Ashbourne is a charming market town nestled in the gently sloping Henmore Valley.
Situated 12 miles from Derby (nearest main train station), Ashbourne can be easily reached from the M1 and M6. Although the train station has long gone, the bus station remains.
Ashbourne has many tea rooms, independent restaurants, banks, supermarkets and shops. Many of the shops specialise in outdoor clothing, although gifts, fashion and consumer goods are also on offer.
The supermarkets in Ashbourne are Sainsburys, Waitrose, Aldi, Co-Op and M&S food.
Ashbourne has a leisure centre with swimming pool, and a large public park. It forms the start of the Tissington Trail, which can be cycled or walked.
Ashbourne is located a stones' throw from Ashbourne Hall, 3 miles from Standlow and 4 miles from Shiningford. Hollywood House is the furthest venue sitting approximately 9 miles away.
Belper is an historic market town within the Derwent Valley Mills World Heritage Site. Belper was once famous for nail making, however it was the genius of the Strutt family who changed the face of the town. Jedediah Strutt built one of the world's earliest water-powered cotton mills. Later a fireproof mill was built by his son William and this had a significant impact on future development. An apprentice called Samuel Slater worked at the mill and after he emigrated to America, he became known as the Father of American Manufacturers.
Close to the mill complex, the beautiful River Gardens offer a tranquil place to watch the world go by.
During the summer months, well dressings take place in the gardens, and there are often concerts or theatre productions to enjoy. The oldest building in Belper is St John's Chapel, dating back to 1250.
Wirksworth is one of the oldest towns in this area of the Peak District, and remains one of those with greatest character. Centred around its marketplace, where markets have been held since Edward I granted the right in 1306, it has many fine old buildings with picturesque alleys and craftsmen's yards. Wirksworth was the southern centre of the Derbyshire lead industry, being one of the most productive mining areas.
The town has a welldressing in Whit week, and every September there occurs the unusual ceremony of 'Clypping', in which the church is encircled by the congregation holding hands around it. Wirksworth also has an excellent Arts Festival, which happens over a weekend in September. The Festival includes all forms of art, with the market square the centre for music, dance and street acts. Many of the houses around the village play hosts to many different forms of artistic expression.
Matlock, the county town of Derbyshire, is a former spa town situated on the River Derwent, where it turns south towards Derby. Just down-river of the main town lies Matlock Bath, which is enclosed by the limestone cliffs of the gorge and contains the main tourist attractions of the locality.
The modern town is divided neatly into two: the main town radiating out from the river, and Matlock Bath spread out along the gorge to the south. Overlooking it all is the gigantic folly that is Riber Castle, built in the 1860s by the same John Smedley who constructed the Hydro.
The town has a full range of shops and facilities, including the "Heights of Abraham" cable cars. The Grand Pavilion at Matlock Bath is a pleasure palace built in 1910 alongside the River Derwent.

Fancy an indoor activity? Experience the local cinemas with a difference, or be a little more adventurous.
The Clayrooms
Try your hand at pottery
The Ritz Cinema at Belper
Try a pot of tea and cake, or a bottle of wine with your film
The Northern Lights Cinema
Book online and enjoy the movies as they used to be
Ten Pin Bowling
Bowling in Derby
Megazone
Lazers in a labyrinth, with smoke swirls and eerie music
Derby Roller World
Roller skating to music
Nottingham Ice-Skating
Fancy a little ice-skating?
Peak Practice Driving Range
Undercover driving range suitable for all weathers.
Indoor climbing wall
Family fun

Derbyshire is full of stately homes and open gardens, some privately owned and many part of the National Trust.
Chatsworth House
Visit the impressive house, farm yard, estate grounds and farm shops
Haddon Hall
Situated on the outskirts of Belper
Tissington Hall
Visit the village of Tissington with the hall, tea rooms and craft shops
Kedleston Hall
Visit the Hall and grounds, with a tearoom
Arkwright's Mill
Take a trip into history
Calke Abbey
Wonderful gardens, grounds and museum
Renishaw Hall & Gardens
Hall and gardens open from Wednesday-Sunday

Restaurants & Taverns in villages around Ashbourne

Wanting to eat out? Ashbourne and the surrounding villages offer some great restaurants and pubs to suit all budgets.

Red Lion
1/2 mile walk from Standlow Farm, in the village of Kniveton
The Miners Arms
A short walk from Shiningford, in the village of Carsington
The Ketch
Gastropub in Kniveton, near Standlow & Shepherd's View Lodge
The Basement Restaurant
Great Thai cuisine near Ashbourne Hall
The Lamplight
Good English cuisine
Jack Rabbits
For brunch & lunch near Ashbourne Hall
The Lighthouse in Boylestone
Award winning chef with taster menus on special nights
The Bowling Green
Steakhouse in Ashbourne
Vault Ashbourne
Afternoon tea and cocktails in the centre of Ashbourne
The Green Man
18th Century pub in the centre of Ashbourne
Saracen's Head
Situated in the village of Shirley, offering excellent home cooking
The George
Award winning food in the Peak District

Restaurants in Belper & the surrounding villages

Staying at Hollywood House or want to explore a little further from Ashbourne? Then take a trip into Belper and eat out
The Hanging Gate
A 5 minute walk from Hollywood House
The Devonshire
Family-friendly quirky pub
Nourish at No. 44
Situated on the Main St
The Bull Shed
Walk from the house to this fabulous quirky restaurant with real ales. Cash only - need to book in advance
The Bluebell Inn
Good pub within walking distance of Hollywood House
Tom Yum
Thai cuisine
George's Fish & Chips
Restaurant open 7 days a week
Mercia - Wirksworth
Locally sourced produce with excellent service
The Balti - Matlock Bath
Super friendly Indian cuisine at good prices.
The Palfrey
Located at Hopping Mill, Milford

Alpaca Experiences
Alpaca walks, with a special discount for our Shiningford guests
Peak Wildlife Park
Take a walk on the wild side!
Alton Towers
Experience the thrills at Alton Towers
Gullivers Travels
Theme park for the little ones
Monkey Forest
Walk amongst 140 roaming monkeys
Chatsworth Farm
Visit Chatsworth Estate and the farmyard
Climb the 189 steps to see the views
See the views from Derby Cathedral

Feeling adventurous?
Outdoor Activities
We offer outdoor activity packages that are sure to get your heart racing!
Wild Park Leisure
Quad bikes, Laser and Paintballing
Go Ape
Zip wire through the trees
Abseiling Derbyshire
Abseiling off a viaduct
It's a Knockout!
Book a session
Ashbourne Airfield
Try handgliding and improve your skills
Heights of Abraham
Take a cable car over the heights of Matlock Bath
Alton Towers
The ultimate spills & thrills
Bubble Football
Only suitable with exclusive use of our venue

Enjoy the peak district your way

Choose from a range of leisure and creative activities throughout the year. 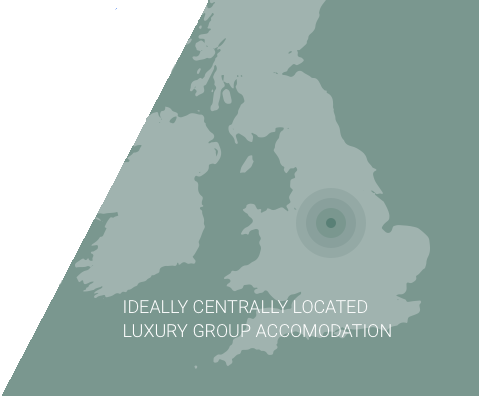